Eat what you want when you want weight loss plan – is that really possible? 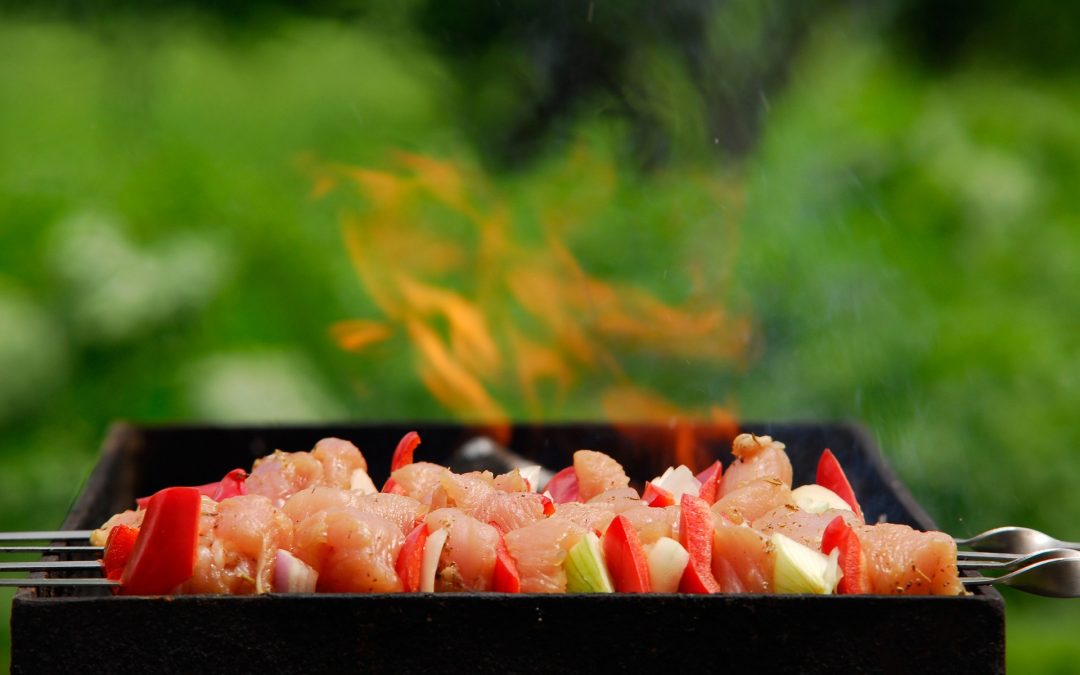 So today I want to share with you a type of conversation I’m regularly drawn into where people ask for my “expert professional” opinion about the particular weight loss product or programme they’re following. Are you sitting comfortably?

Here goes….. Once upon a time, not so long ago I was drawn into a conversation with 2 non-dietetic colleagues who were having a discussion about their plans around weight loss for the months ahead. Like so many women, one of them had a ‘big event’ later in the year she needed to ‘look great for’, with the added motivation of ‘rubbing her ex-boyfriends nose in her “stunningness” when she’d shed her excess weight’ Like millions of women over the last 40’sh years she was looking forward to following a commercial weight loss group programme that she’d signed up to. This one offered her ‘a no-hunger’ eating plan that puts her in control of her weight loss, where she can eat as much ‘free food’ as she likes’ She turned to me and asked ‘that’s great isn’t it, how does that work’?

Most ‘free foods’ have an actual calorific value……

I took a deep breath, a very deep breath, because I knew, based on previous similar conversations when I shared my expert in nutrition, common sense approach, let’s provide permanent results rather than quick fix methods, would not be an easy one for her to swallow and digest.  Despite her weight yo-yoing over many years, following these types of programmes I knew it to be highly likely that I’d end up being bad cop who’d got it all wrong and just being mean.

Despite my trepidation, because I passionately want people to achieve lasting weight loss results, good health, energy and vitality I started to explain that for people whose goal it is to lose several stones in weight, who switch their diet rich in high calorie, high fat and high sugar foods for these unlimited ‘free food’s they WILL likely lose weight. HOWEVER, as I hinted earlier, there’s a snag with this approach…… …….as your body weight reduces, so too does your basal metabolic rate (BMR – the number of calories your body needs to survive just for basic bodily functions) and therefore, so too does the number of calories your body needs every day. The snag being that a reduced BMR means that eating unlimited amounts of ‘free foods’ may actually stall any weight loss achieved and sadly often brings about weight regain. The reason for this? Most of these ‘free foods’ have an actual calorific value. “No way” she said, “they’re free!”

I went on to provide her with some examples of the quanitites of these ‘free foods’ that contain 100kcals; including apples, bananas, mangoes, sweetcorn, carrots, onions, fish, bacon, mince, chicken, Quorn, pasta, rice, chickpeas and  tomato puree.  Crucial information given that for some of these ‘free food’ items you don’t really get a lot of bang for your 100kcal bucks. Important information because, simply put, sustained weight loss needs you to eat less calories than you burn off every week! Yes I know there are other factors involved, but that’s a conversation for another day…. These types of 100kcals examples are important in my repertoire, whether those calories come from fruit, vegetables, chocolate, cheese, crisps, fish, beef or wine.  This is because it helps me explain how adding or cutting just 100kcal/day of any food or drink is all it takes to achieve around a 10lb weight loss or weight gain over a 12 month period.

I then shared with her some of the frustrations the majority of my NHS weight management patients felt after decades of following various commercial weight loss programmes.  These patients had lost weight initially which then stalled despite following the various programmes ‘to the letter’ which led to them feeling frustrated.  From here they stopped following that weight loss programme which brought about weight regain.  They then moved to the next and the next weight loss programme or product, however they all had the same end result, weight loss and subsequent regain; often described as the yoyo dieting cycle, eventually becoming much heavier than when they started.

The picture graph below may look familiar to some of you reading this.  It’s showing the trend experienced by many women who start dieting at an early age only to realise some decades later they’re several stones heavier, despite numerous and arduous weight loss efforts over the years. 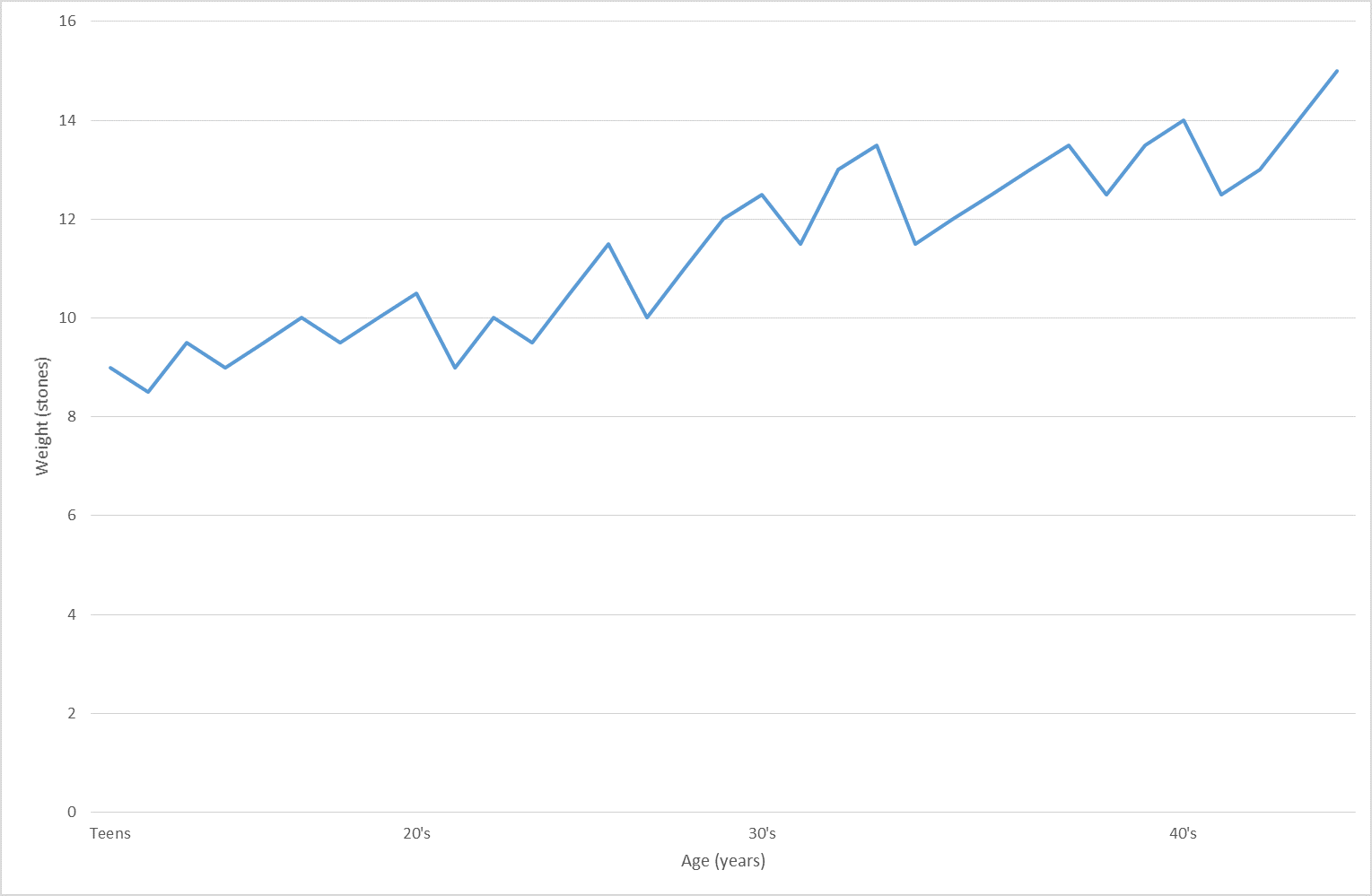 I then highlighted that the £4 – 5 per week fee for a 2 – 4 minute consultation while being weighed equated to around a £60 – £150 per hour fee.  I could see the abject shock she felt about this cost in her face, she quickly recovered her composure and said ‘I don’t care about the cost, the shame will motivate me do it.’ She clearly cared about the cost, however it wasn’t what she wanted to hear either, sooooo she switched to…. ‘Does it matter what you eat and when you eat it’ Tongue in cheek, with a wry smile on my lips I replied ‘what does your group leader say about that?”  She replied ‘I don’t think that’s something she’d know about’. I then shared with her that the evidence is now indicating that our circadian rhythm (body clock) may be important to weight management and health.  Going on to explain researcher are suggesting that eating all of our food between the hours of 8am and 6pm could be helpful for weight management and health, although further studies are required to confirm these early findings. Again, this wasn’t what she wanted to hear….because she works shifts, making it difficult to eat within this timeframe. …..which tipped her over the edge and could see her annoyance with me for sharing this information as it doesn’t suit her lifestyle and routine.  We oftentimes forget how the evolution of our biology has not kept pace with developments in working practice and technology.

Sadly what this colleague was looking for was my ‘professional’ expert reassurance that she could eat as much food as she likes as long as most of it was ‘free foods’ whenever she wanted and lose all of the weight she desired and keep it off As a dietitian, like all other allied health professionals, which this lady happens to be too, what do I do with all of these robustly studied scientific research facts, ignore them?

Unfortunately I can’t, this information is based on decades of research by very clever people.  That research is always uncovering new ways forward, which I love and get frustrated with in equal measures.  Another conversation for the future.

So I know you’re dying to know what happened next, did she lose the weight she wanted to? Yes she lost some, but alas not all that she wanted, and 18 months later she’s regained it all, and now heavier than when she started. So the take away message (no pun intended!!!) is, until we accept and embrace that weight loss and health are highly correlated with the quality of our overall diet and lifestyle choices – a high fibre, calorie controlled diet containing a wide range of grains, vegetables and fruits that’s low in animal protein in conjunction with getting enough, sleep, exercise and manage our stress – we’re kicking our own health and wellbeing into the long grass. The risk of developing heart disease, strokes, type 2 diabetes and around 50% of cancers are significantly lowered when following a high fibre, calorie-controlled Mediterranean style diet in conjunction with regular physical activity.

The sad truth is that most weight loss programmes do not fully incorporate these factor that support women to achieve and maintain their healthy body weight. As you may know already I support women with a pioneering, holistic approach to wave goodbye to comfort eating and the guilt, shame and weight gain that goes with it. Replacing this with confidence to reach and maintain a body weight they are truly happy with while enjoying real, nutritious, family-friendly foods. So, if you’re ready to transform how your body looks and feels, please do feel free to get in touch.